We at Madeleine Travels love the “lower ground floor” flats in London.  While Oscar Wilde urges us to see stars from the gutters, we can certainly glimpse through to the partially subterranean living and dining rooms through the gutters in London (see Madeleine goes to London)!

Might the Brits’ subterranean living tradition be related to its tradition of the fantasy genre in literature?  Could we imagine while gazing through these gutters, the rabbit hole that Alice fell through that led her to the fantasy Wonderland, or the wardrobe in Professor Kirke’s house that led to the magical land of Narnia?

(The original handwritten manuscript of Alice in Wonderland is in the British Library …. )

(We at Madeleine’s recently received a music score that was based on the acrostic poem that was a seven-verse epilogue to the second of the Alice books – where the initial letters of each of the line of the poem spelt out the name Alice Pleasance Liddell, the name of the real-life Alice for whom Lewis Carroll Wrote his stories that became Alice in Wonderland). 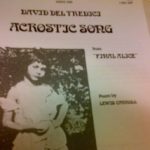 There are more fantasy stories that have become children classics worldwide that come from Britain’s literary tradition – Watership Down is one of our favourites, again, with lots of rabbits being snared or gassed.  And then, of course, there is Harry Potter – and we cannot easily pass Kings Cross train station without thinking about his Hogwarts Express that departs from Platform 9 ¾ which is actually the wall between platforms 4 and 5.  (See Chapters 10 and 26 of Madeleine goes to London).