We at Madeleine’s did entertain the possibility of spending Christmas in Tokyo ….

But quarantine restrictions still made us hesitate …

But, we are dreaming about it ….

In this year of unprecedented and can’t-travel-too-far challenges, we are happy to know some of our favourite Christmas-in-Tokyo experiences are still open – we share 4 of our favourite fairs followed by 4 of our most favourite winter illuminations (lights, lights, and more lights!) below.  We feel certain that our Tokyo friends will find new ways to enjoy the Christmas spirit – and we hear that the Yebisu chandelier will turn blue every 30 minutes in the evenings in honour of medical workers – even if we smile at the thought that our Tokyo friend who works for the Ministry of Finance will likely still be feverishly working on the budget in the run-up to end of the year.  We are also a little sad that the annual autumn evening illumination at Rikugien Gardens was cancelled (the gardens itself is open).

(Note that the “blue cave” [Ao no Dokutsu] illuminations in Shibuya – voted number 1 in Tokyo with its blue-light-and-shadow-glowing-everywhere atmosphere – and the ever-popular Caretta Shiodome illuminations – with its Disney theme and sound as well as light – have both been cancelled due to Covid.  The Shinjuku Minami Lumi and Shinjuku Terrace City Illumination visible all over the south and west gates of Shinjuku Station have also been cancelled.  Even the Omotesando Hills Christmas – one of Tokyoites’ favourite winter illuminations, on the city’s most elegant street, with the Zelkova trees that line the street lit up with champagne gold LED lights – has been cancelled.  We haven’t included these below).

A special even if not White Christmas in Tokyo

Does it ever
snow in Tokyo
at Christmas?”

First, a little diversion though … We’ve never been in Tokyo on a snowy Christmas Day.

Yes Tokyo does get snow: data from the Japan Meteorological Agency tells us that, consistently for the last 70+ years, Tokyo has been getting 9 to 10 snow days on average each year.  But the snowiest month is February followed by January; furthermore, most of the time, the snow is very light, instantly melting after it falls.  (In 2016, there was a lot of excitement when the Tokyo area got its first November dusting of snow in 54 years; first snowfall is “hatsuyuki,” which literally translated to “first snow”.

So, getting snow on Christmas Day is quite unusual.  So … dream on … our Japanese friends happily sing “I’m dreaming of a white Christmas” without any irony…

But if you really want to go find some snow or even do some skiing close to Tokyo, it is possible: there are a few resorts within 1.5-hours of travel time, with the Gala Yuzawa resort (just under 1.5 hours from Tokyo Station on Shinkansen) is very popular for day trips, and if you don’t mind spending just a little longer on the travelling, you can jet over to the foot of Mount Fuji to the Fujiten Snow Resort too.

But a Tokyo Christmas can mean be a day trip to the Onsen with snowy mountainscapes in the background: two popular areas for that are Minakami that has some rather famous baths, including outdoor baths with beautiful views of nature, and guaranteed outdoor bath in the snow at Manza Onsen that has some of the most sulphuric waters in all of Japan.  A very special way to spend Christmas indeed! 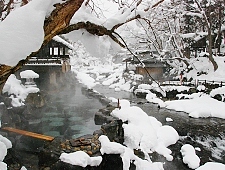 Visit a few Christmas markets and drink some mulled wine

Even without snow (and even as Christmas is not much of a public holiday in Japan), there’s much festive atmosphere around and plenty of Christmas-y things in the happening places.  If you like the tradition of Christmas markets, for instance, you are in luck because you are spoilt for choice when in Tokyo …

The Tokyo Christmas market – the city’s largest Christmas market, known for its 14m-high Christmas pyramid, and with handicraft workshops and musical performances in addition to the food stalls, all under the warm glow of Tokyo Tower.  It’s usually held in Hibiya Park but is relocating to Shiba Park this year (and has just opened this weekend). One of the most Christmassy Christmas markets out there … Prost!

Roppongi Hills Christmas market – the city’s oldest Christmas market, inspired by one of the world’s largest held in Stuttgart, Germany.  There is a cosy festive atmosphere, and honoring the German tradition, there is a huge 5-stage wooden pyramid, with artfully made dolls and animals rotating, in the center.  This is a great spot to catch some winter illuminations too: make sure to also get to the 400m of Keyakizaka behind Roppongi Hills which has become one of the most popular couples’ strolling spots with brilliant blue LEDs decorating the trees and Tokyo Tower providing the perfect backdrop (it’s in our list of favourite illuminations).  Go for the shimmering display and go round the corners to see the Christmas trees of Roku-Roku plaza and West Walk too.  (Direct access from Roppongi Station C1 Exit) 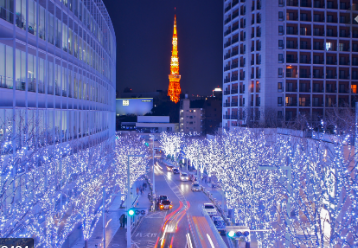 Yokoyama red brick warehouse (“Akarenga”) Christmas market – this is a popular market slightly out of town but with a large ice rink in addition to the myriads of market stalls and a Christmas tree.  Like many of Tokyo’s Christmas markets, the food here has a German flavour with stollen, sausages and spiced wine as well as plenty of snow globes, traditional toys and toffees to take home as gifts.  There are also workshop opportunities to make your own festive decorations from wreaths to candles, a street piano and live Christmas song shows, as well as appearances by Father Christmas himself on certain days.

Skytree “Solamachi” dream Christmas market – Skytree, known as the tallest structure in the world (and taking over from Tokyo Tower as the tallest in Tokyo for 10 years now), holds an annual Christmas market not at the top but at the foot of the tower, with traditional market stalls selling food and drink as well as wonderful festive decorations and illuminations, acapella performances, popular bands, a Christmas Lottery, and special seasonal lighting on Skytree itself (Skytree’s special lighting schedule is here.)

And then there are the lights

As for our most favourite winter illuminations in Tokyo …

Meguro-gawa Minna no Illumination – First on our list – and making our eyes mist over as we think about it – is the two-kilometer-long pink-coloured illuminated trees along the Meguro River between Gotanda and Osaki stations on the Yamanote Line (in pink LED lights to resemble cherry blossoms).  It makes for a very pretty riverside stroll!  Note however that this is only held online in 2020.

Yebisu Garden Place Baccarat Eternal Lights – As soon as you pass through the long Sky Walk (east exit) from JR Ebisu station, you’ll be greeted by a giant Christmas tree, overseeing a wide array of stalls selling European-inspired crafts, food and seasonal gifts. The entire shopping complex is decorated with thousands of gorgeously shining LED lights and an impressive Baccarat chandelier, making this market one of the most romantic and festive venues for this holiday season.

Akasaka Ark Hills Christmas.  Ark Hills Is a flea market popular with Tokyoites and at Christmas, it holds a special Christmas flea market on the 2nd Sunday of December selling original Christmas goods that cannot be found any place else.  There is white light illumination and a giant Christmas tree too.

Odaiba DECKs illuminations. Come here for the 20-meter tall brilliantly illuminated Christmas tree by the waters that is the perfect place to get some photos taken against the Tokyo Bay skyline with the Rainbow Bridge and Tokyo Tower in the background.

Two other noteworthy traditions is the Akasaka Sacas Sound x Terrace Illuminations at the TBS studios in central Tokyo, with a subtle light show synchronized to seasonal music and located right next to exits 1 and 3 of Akasaka Station, and known for an illuminated love heart with a small stand perfect for that romantic selfie and an illuminated mini-Tokyo Tower, as well as the “Omohara forest” illumination on the rooftop garden of the Tokyu Plaza Omotesando Harajuku building. 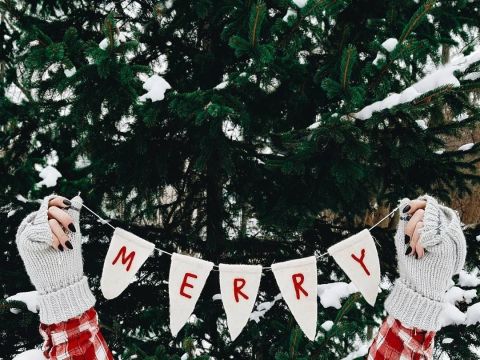