Now that autumn coolness has descended upon us (at least those of us in the northern hemisphere), we can definitely remember the very hot Europe we were in this late summer, London followed by Paris followed by Antwerp, and before then we were in “southern winter” in Sydney.

“The world” as we found in these 4 cities is indeed a post-Covid or emerging-out-of-Covid world.  Piccadilly in London is still rather pleasant to meander through at 6pm on a weekday evening, something that is unheard of in BC (before-Covid) times.  On the opposite side of the globe, it was a little difficult to find cafes for meet-ups in Sydney, as street “traffic” has been much reduced and there is still a strong sense of vigilance that lingers (even as many people have taken their face masks off).  It seems like people were simply doing less of what Parisians call métro, boulot, dodo (train, job, sleep) having gotten used to working remotely during Covid and that reluctance to go through the grind lingers.

Walking in Hyde Park while in London is always a good idea though, even if it is hot and dry and rain is much-needed.  So is wandering around and admiring Parisian beauty in the Tuileries.  As for Antwerp the artsy and cool city, our top 3 loves were:

With all that “extra time” gained from reduced commuting, we can let our creative juices flow.  We did some suburb-to-suburb walking while in Sydney and surveyed the contemporary art scene a little, one of our finds being White Rabbit Gallery (30 Balfour St, Chippendale NSW 2008) – where we saw a most enlightening installation of lit-up text by a Beijing artist who quoted lines from a Pushkin poem too. 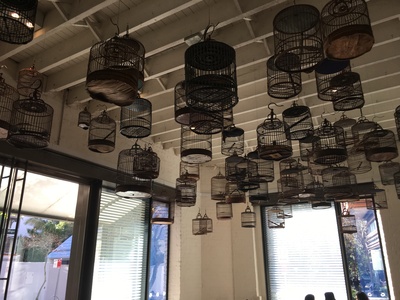 Once upon a time (in fact, we think we were there for its inaugural year – 2006!), we did the Seven Bridges Walk (the 7 bridges being the Sydney Harbour Bridge, Pyrmont Bridge, Anzac Bridge, Iron Cove Bridge, Gladesville Bridge, Tarban Creek Bridgeand Fig Tree Bridge), with each bridge providing a unique view of the beautiful harbour and waterways.  After 2 years of Covid, this most wonderful city-wide event that also raises significant amounts of money for cancer is back on this October.

But this summer we went in search of and walked the Ryde Bridge which connects Ryde in the northern suburbs of Sydney to Rhodes in Sydney’s inner west.  The bridge is quite special as it is located at an important crossing over the Parramatta River, between Ryde and Rhodes, which was one of the narrowest points on the river, and the bridge itself is quite unusual too and of heritage interest (built in 1935), as it is the only lift span bridge on Sydney Harbour and its tributaries.

As for the perennial favourite, Paris, we didn’t manage to fit in the Seine bridges walk (see our Paris bridges walk story), but we did manage to admire some Beethoven busts inside the Musée Bourdelle (still a free-entry museum!) which we would definitely recommend for those who need inspirations!  And our favourite Beethoven bust in that museum was that with the inscription on the front:

This sentence – named “parole” i.e. motto of Beethoven by Bourdelle, clearly expresses the sculptor’s view of Beethoven and his music.  The composer became the epitome of a creative genius.  After 2.5 years of a world affected by Covid-related complications, we needed inspirations!